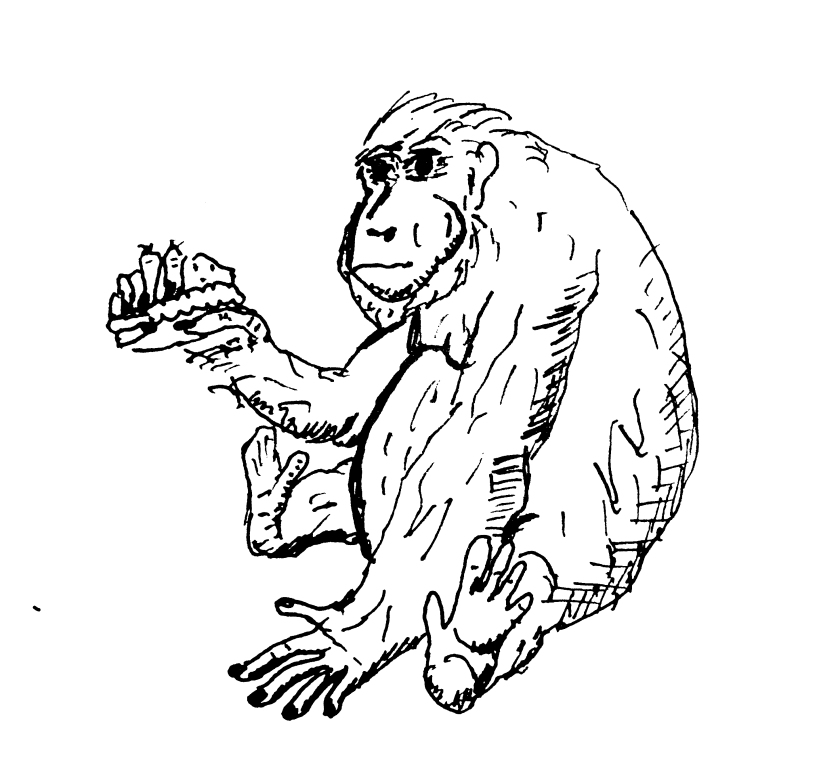 The infinite monkey theorem, perhaps first invoked by French mathematician Émile Borel, posits that a monkey condemned to randomly punch keys on a typewriter for an infinite period of time would eventually produce the complete works of Shakespeare. The thought experiment may also be a good metaphor for encapsulating the experience of writing amateur science journalism.

Now consider the same experiment, replacing the generic monkey with members of the species Macaca mulatta, rhesus macaques, and the typewriter with as much processed food as the macaques can stuff into their furry little faces. Modestly pare down the timescale of the experiment from infinite time to about 25 years, increase the number of macaques from one lonely typist to about 38 individuals, and you have a pretty good first approximation of the control group for the University of Wisconsin-Madison Energy Metabolism and Chronic Disease study. You’ll be more familiar with the name used in the popular press, something including the words “caloric restriction,” “longevity” or “lifespan,” and “monkey.”

Caloric restriction (CR) has a long history of increasing longevity in yeast, nematodes, and mice. Youtube is full of mini-documentaries detailing the lives of the voluntarily emaciated, and many a blogger describes their day to day struggle to minimize caloric intake. The human caloric restriction community may have breathed a combined sigh of frustration and relief in 2012 when de facto rivals at the National Institutes of Aging (NIA), led by Dr. Rafa da Cabo, published an article contradicting the 2009 claim that it works in monkeys, too.

The most recent foray in the field of macaque CR published in Nature Communications by Dr. Ricki Colman et al. from Wisconsin, claims the NIA study control monkeys were actually on a CR diet as well, albeit less extreme than the 30% reduction of the experimental diet. They compared the mean weight of control monkeys in both studies to a national database of research macaque mass, the internet Primate Ageing Database or iPAD. The NIA controls were indeed as much as 15% lighter than the averages in the database, as would be expected if the animals were on a restricted diet. However, the UW controls were 5-10% heavier than average, blurring the line between normal feeding and overeating. iPAD does not distinguish between solitary or group housing in macaques, while both the NIA and the Wisconsin study house each individual separately.

The difference ultimately comes down to a discrepancy in what is considered a normal diet. Colman et al fed controls as much of a fortified, low-fat diet, relatively rich in sugar content, as they wanted. This ad libitum feeding was meant to mirror the eating habits of humans. At the NIA, controls wer given a diet based on estimated nutritional need, rather than appetite, and the food was less processed.

Since the goal of using primates in this research is to translate the results to humans, the differing diet choices for controls represent a meaningful philosophical difference: should we compare experiments to how we are or how we should be? Granted the industrialized world is now more overweight than not, and the control group studied by UW researchers may be a more realistic mirror of the human condition. But the survival benefits seen in the CR group may boil down to the benefits of eating a reasonable diet, avoiding excessive sugar and getting out of the cage once in a while. In short the UW study was designed in a way that would err on the side of confirming their hypothesis, while the NIA study was much more conducive to leaving room for the null alternative.

The controversy underlines the difficulty of taking promising results in “lower” animals and common model organisms and applying them to humans. The idea of putting 76 humans into controlled conditions for 25 years to test a radical diet or any other intervention is limited to the realm of the horror subtype of science fiction. This is why much of the health reports that trickle down into the popular press are based on “survey science,” in which respondents answer questionnaires regarding their diet and lifestyle, with varying degrees of quantitative oversight. This is in large part what leads to the impression that every other week the things that kill you are healthy again and vice-versa. It pays in terms of publicity for a university press office to encourage journalists to parrot a warning that eating meat is as deadly as smoking, even if human self-reporting is notoriously bad, and the underlying data may be a bit more subtle.

The climate for ethical considerations in even non-human primate research is evolving. In early 2013, the National Institutes of Health announced that they would begin retiring active chimpanzees from research with no intent to replace them. It is unlikely that either the experimental conditions for the NIA or the Wisconsin study will be reproduced in the near-future, so there won’t be any mulligans for CR in monkeys. This increases the scrutiny and standard of evidence for the results from these experiments, and makes it all the more important for the scientific community and popular press to come to cohesive conclusions.

The “need for consensus” may be overstated, as the studies are very different experiments. It is likely that those both scientifically literate and with the time and inclination to read the literature wouldn’t be misled in their conclusions, but this group will not include most people who may be affected by the outcome. After all, everyone gets old eventually, if they are lucky enough. The responsibility to avoid painting the situation as a sensational controversy and accurately convey the results of these experiments belongs to science journalists and academics in combination.