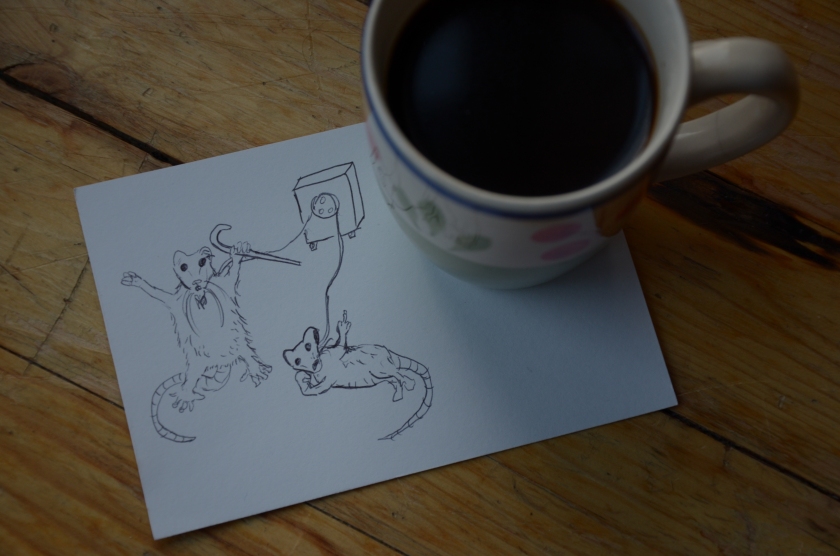 A tragic tale of a star-crossed pair,
science vs. a journalist’s flare

When reporting on scientific topics, particularly when describing individual papers, how important is it for the popular coverage to have anything to do with the source material? Let’s take a look at a recent science paper from Justin Rebo and others in Nature Communications and the accompanying coverage by Claire Maldarelli at Popular Science

Interest in parabiosis has increased recently due to coverage of scientific papers describing promising results in mice and the high-profile of some parabiosis enthusiasts. Parabiosis, from the Latin for “living beside”, typically has involved stitching two mice together. After a few days the fused tissue provides blood exchange through a network of newly formed capillaries.

The most recent investigation into the healing effects of youthful blood exchange from Rebo et al. expands the equipment list used for blood exchange beyond the old technique of duct-taping two animals together surgically joining two animals. Instead of relying on the animals to grow new capillary beds for blood exchange to occur, the authors of the new paper used a small pump to exchange a few drops of blood at a time until both mice had approximately the same proportion of their own blood and that of a donor and vice-versa.

According to the coverage from Popular Science:

Just a few paragraphs further Maldarelli quotes Conboy (last author on the paper) as saying “‘This study tells us that young blood, by itself, cannot work as medicine’.” In contrast, in the paper the authors state that “Importantly, our work on rodent blood exchange establishes that blood age has virtually immediate effects on regeneration of all three germ layer derivatives.” and later that “. . . extracorporeal blood manipulation provides a modality of rapid translation to human clinical intervention.”[1] There seems to be a bit of disagreement between the version of Conboy on the author list of the scientific article and the version of Conboy quoted in the PopSci coverage of the same article.

We also learned from Maldarelli that the tests reported in the paper were performed a month after completing the blood exchange procedure, but the longest duration from blood exchange to the experiment’s end (sacrifice for post-mortem tissue analysis) was 6 days after blood exchange.

I came across the PopSci coverage when it appeared on a meta-news site that highlights popular web articles, so it’s safe to assume I wasn’t the first to read it. Shouldn’t the coverage of scientific articles reported in the lay press have more in common with the source material than just buzzwords? The science wasn’t strictly cut and dried: not every marker or metric responded in the same way to the old/young blood exchange, and while I agree that we shouldn’t be encouraging anyone to build a blood-exchange rejuvenation pod in their garage, the findings of the article fell a long way from the conclusions reported in the lay-article: that young blood had no effect on the physiology of old mice. This is to say nothing about the quality of the paper itself and the confidence we should assign to the experimental results in the first place: with 12 mice total* and a p-value cutoff of 0.05 (1 out of every 20 experiments will appear significant at random), I’d take the original results with a grain of salt as well.

This is the face of science we show the public, and it’s unreliable. It is no easy task for journalists to accurately report and interpret scientific research. Deadlines are tight, and writers face competition and pressure from cheap amateur blogs and regurgitation feeds. “What can I do to help?” you ask. As a consumer of information you can demand scientific literacy in the science news you consume. Ask for writers to convey confidence and probability in a consisent way that can be understood and compared to other results by non-specialists. As a bare minimum, science and the press that covers it should at least have more in common than the latest brand of esoteric jargon.

*The methods describe a purchase of 6 old and 6 young mice. However, elsewhere in the paper the groups are said to contain 8 mice each. Thus it is not clear how many mice in total were used in these experiments, and how they managed to create 12 blood exchange pairings for both control and experimental groups without re-using the same mice.