In thinking about camera arrays, integral photography, and light fields, I began to see the similarities between stereographic photos and those from an array of cameras (or a single camera occupying multiple positions at different times). What sort of depth can be achieved by a moving lens over a stationary sensor? A fair amount, for distances at which the object distance is not >> than the inter-aperture distance between lens positions. The result is below: you’ll need a red/blue pair of filters or glasses to view it. 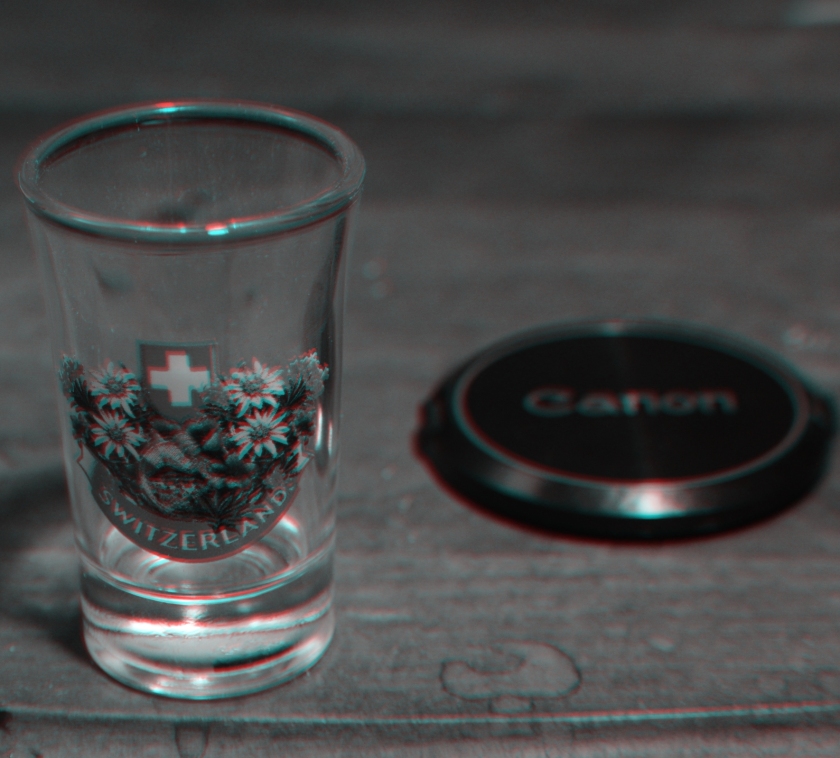 A perspective control lens like the one used here is typically used to straighten the “vanishing lines” of tall buildings or features without wasting sensor/film space, and generally for perspective control. The lens I used here was a 35mm f/2.8 Canon FD tilt-shift lens on a Nikon D5100 with a Fotodiox mount/infinity correction adapter, the images were separated by ten lateral ticks as marked on the lens body (these appear to be about a millimetre, but are not labeled). The object distance was approximately ten cm.

After watching Dr. Marc Levoy’s talk on light fields and the Stanford camera array I thought I’d investigate for myself the uses for synthetic aperture photography. From the talk:

By changing the amount of shift, you can change the depth of objects that are in focus. And here’s what that looks like. So we’re focusing synthetically on the bushes, across the street through my grad students into the building and there’s a step stool in the building.

This is about the same as matching up the left/right channel on a stereo anaglyph, but with more perspectives as inputs. To get a feel for things I drilled out a camera mount to attach to the end of a macro bellows rail and took a series of horizontally displaced images, shifting and combining them in Octave to focus at different depths.
END_OF_DOCUMENT_TOKEN_TO_BE_REPLACED