I visualized predicted protein structures from the novel 2019 coronavirus. The structures are the latest from Deepmind’s AlphaFold, the champion entry in the CASP13 protein structure prediction competition that took place in 2018. They’ve reportedly continued to make improvements since then (perhaps hoping to make a similar showing at the next CASP spinning up this year), and there are open source implementations here and here (official), though I haven’t looked into the code yet. I’ve put together some notes on the putative functions of each protein described on the SWISS-MODEL site, which accompany the animated structure visualizations below. The gif files are each a few tens of Mb and so may take some time to load. If you’d prefer to look at the structures rendered as stereo anaglyphs (i.e. best-viewed with red/blue 3D glasses), click here.

I used PyMOL to render the predicted structures and build the animations in this post. PyMOL is open source software, and it’s pretty great. If you are a protein structure enthusiast, want to use PyMOL, and can afford to buy a license there is an incentive version that supports the maintenance of the open source project and ensures you always have the latest, greatest version of the program to work with.

This membrane protein is a part of the viral envelope. Via interactions with other proteins it plays an important role in forming the viral particle, but pre-existing template models of this protein are of low quality.

Nsp6 seems to play a role in inducing the host cell to make autophagosomes in order to deliver viral particles to lysosomes. Subverting the autophagsomal and lysosomal machinery of the host cell is a part of the maturation cycle for several different types of viruses. Low quality models of Nsp6 fragments were generated from homology modeling available on the SWISS-MODEL website

The function of Nsp2 isn’t fully determined yet, but it may have something to do with depressing host immune response and cell survival by interacting with Prohibitin 1 and 2 (PHB and PHB2). Prohibitin proteins have been implicated as receptors for chikungunya, and dengue fever virus particles.

A little more is known about Protein 3a. The protein forms a tetrameric sodium channel that may be important for mediating the release of viral particles. Like the other proteins targeted by Deepmind’s AlphaFold team, this protein doesn’t have good sequence homologues and so had been limited to only a partial, low quality structure prediction.

PL-PRO is a protease, which as the name suggests means it makes cuts in other protein. From the name, papain is a protease family named for the protease found in papaya. This one is responsible for processing viral RNA replicase by making a pair of cuts near the N-terminus of one of the peptides that make up the viral replicase. It also is associated with making membrane vesicles important for viral replication, along with Nsp4. 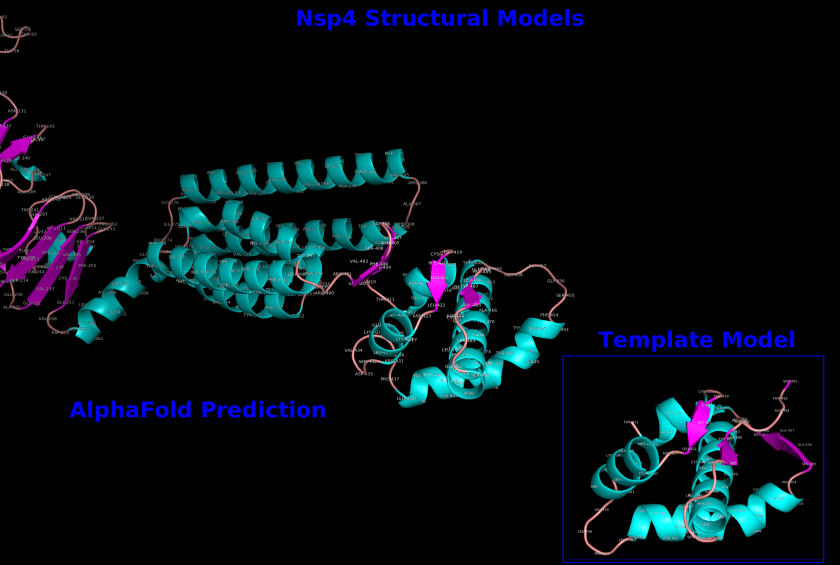 The predicted structures released by Deepmind come with a grain of salt which I’ll reiterate here. The structures are predicted (not experimental) so they may differ quite a bit from their native forms. Deepmind has made the structural estimates available under a CC BY 4.0 license (the citation is at the end of the post), and I’ll maintain the visualizations under the same license: feel free to use them with attribution.

There’s obviously a lot going on with the current coronavirus pandemic, so I won’t repeat the information about hand washing, social distancing, or hiding out in the woods that you’ve probably already read about. If you’re interested in learning more about protein structure prediction you can start with the Wikipedia entry and/or the introduction course on the SWISS-MODEL website. The Levinthal’s paradox is also a fun thought experiment for framing the problem and it’s inherent difficulty. Mohammed AlQuraishi wrote an insightful recap of AlphaFold at CASP13.

There is a tremendous amount of research effort currently dedicated to studying the 2019 novel coronavirus, including several structural modelling projects. If you don’t want to dive into the rabbit hole vortex of computational protein structure prediction but still want to do something combining protein structure and the COVID-19 virus, Folding@Home and Foldit both have projects related to the new coronavirus. You can help by donating some of your idle computer resources to simulate structural dynamics with Folding@Home or you can work at solving structural puzzles Foldit.

This site uses Akismet to reduce spam. Learn how your comment data is processed.